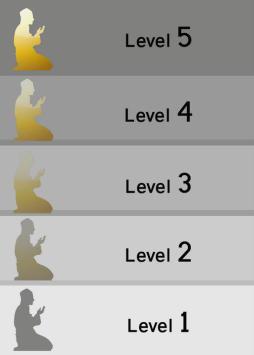 The First: The level of the one who is negligent and wrongs his soul: He is the one who falls short in performing wudhoo (ablution) properly, performing the prayer upon its time and within its specified limits, and in fulfilling its essential pillars.

The Second: The one who guards his prayers upon their proper times and within their specified limits, fulfils their essential pillars and performs his wudhoo with care. However, his striving (in achieving the above) is wasted due whisperings in his prayer so he is taken away by thoughts and ideas.

The Third: The one who guards his prayers within the specified limits, fulfils their essential pillars and strives with himself to repel the whisperings, thoughts and ideas. He is busy struggling against his enemy (Shaytaanor Satan) so that he does not steal from the prayer. On account of this he is engaged in (both) prayer and jihaad.

The Fourth: The one who stands for the prayer, completes and perfects its due rights, its essential pillars, performs it within its specified limits and his heart becomes engrossed in safeguarding its rights and specified limits, so that nothing is wasted from it. His whole concern is directed towards its establishment, its completion and its perfection, as it should be. His heart is immersed in the prayer and in enslavement to his Lord the Exalted.

The Fifth: The one who stands for the prayer like the one mentioned above. However, on top of this, he has taken and placed his heart in front of his Lord Azzawajall, looking towards Him with his heart with anticipation, (his heart) filled with His love and His might, as if he sees and witnesses Allaah. The whisperings, thoughts and ideas have vanished and the coverings which are between him and his Lord are raised. What is between this person and others with respect to the prayer, is superior and greater than what is between the heavens and the earth. This person is busy with his Lord Azzawajall, delighted with Him.

Now think about this, what level do you think you are in?
Are you sure?
Could be better, right?
This is kinda scary.
A true fight to the finish.

This site uses Akismet to reduce spam. Learn how your comment data is processed.